The ruling of using the one sided Hand Drum (Duff), 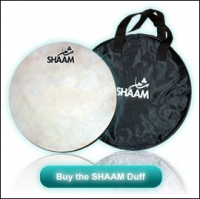 with regards to combining the use of the drum (in arabic duff – a one sided hand instrument) with singing, it is permissible on certain occasions. The scholars have dispensed a concession (rukhsa), at times of joy and happiness, like the two Eids, Weddings, the return of a person to his home land after a long time, or the return of a pilgrim from Hajj. An example of this is when the Prophet (peace be upon him) arrived in Medina, the illuminated city. The men, women and children lined the streets and sang the famous lines: ‘TALA’ AL BADRU A’LAYNA’, ‘the full moon is approaching upon us’, and they sang this whilst beating the drum (duff).

a companion of the Prophet

entered my house on the morning of my wedding, and we had two servant women who were singing and praising the people martyred at the battle of Badr.” (10)

In an Authentic Hadith narrated by Ibn Majah from Anas

passed by some young children when he recently made Hijrah to Medina, who happened to be his neighbours. They were beating their drum and singing:

“We are the neighbours of Banu Najar, Oh what a wonderful neighbour to have as Muhammad” And the Prophet replied to them: “Allah Knows, that I love you so very much!”

There is also a hadith narrated by Tirmidhi, when the Prophet

returned from some of the battles, a slave woman approached Him and said:

“Oh Messenger of Allah, I vowed that if Allah returned you safely that I will beat the duff in front of you. The Prophet

replied: “If you vowed to do it, then do it, if not then don’t.” So she took the drum and started to beat it.

In another narration by Bukhari and Muslim from Sayyidata Aisha

entered the house whilst she had two servant girls singing and beating the drum (duff). This is whilst the Prophet

was lying down resting, and had his face covered with his garb. When Abu Bakr

saw this, he reprimanded her. Then the messenger of Allah

uncovered his face and said: “Oh Abu Bakr leave them alone, for it is the days of Eid.”

Mullah Ali Qari says:”There is a faction (of the scholars) who say it is permissible in its totality, our companions from the Hanafi’s say: Its permissibility is confined to specific occasions like weddings. This is based on a hadith of the Prophet

“Openly declare this marriage and beat the drum (Duff). This is narrated by Tirmidhi from Sayyidata Aisha

This comes with the condition that there are no thimbles (Jalajil) attached to the drum. This is because the thimbles are classed as bells. These repel Allah’s Angels and the drum used in the time of the Prophet

. It is not the voice, singing, or beating the drum which is intrinsically unlawful. Rather it is what it entails. So, if it entails the Heedlessness of Allah, fornication, love of this world and falling to the lowest and foulest of human tendencies then it is unlawful. This is the case for most of what we see today on television or hear on the radio.

However, if it entails inducing a love for Allah and his Messenger

, rejoicing in the permissible (Halal), like weddings, a pilgrim returning from hajj or the returning of a beloved after a long time of estrangement, and it is done with the correct etiquette, modesty and sobriety it is permissible.

It would be pertinent at this point to specify what are the things which one takes rejoice in as a Muslim, or for someone who has taken on this religion of Islam, they will tell you that they have no greater happiness in their life. This is especially true for people who might not have been previously practicing their Islam. For them, they recognise the betterment that Islam has brought into their lives. This might be either leaving old ways such as alcohol, drugs, bad company or perhaps even the spiritual fulfilment which they receive day in day out with every breath. In fact it is a command of Allah to rejoice in our Islam. Allah almighty says in his magnificent book:

Say: ‘BY THE GRACE OF ALLAH AND HIS MERCY AND IN THAT TAKE REJOICE’

said in regards to this verse: “The grace of Allah is the Qur’an and the Mercy is Muhammad” (Peace and blessings of Allah be upon him). This can be found in the tafsir: “durr al manthur fi tafsir al ma’thur” by imaam al Sayuti. Third volume. Darr al kutub i’lmiyya edition. First print 1990.

Finally, Allah and his Messenger know best. All praise is due to Allah the Lord of the Worlds. May the best and choicest of praises and salutations be upon the best and finest of Allah’s creation, our Master Sayyidina Muhammad

(10) This hadith was narrated by Al Bukhari and Ibn Maja in the “kitab an nikah” section on Marriage.
(11) Section taken from Mullah A’li Qari’s book “Assima wal Ghinaa” Listening to poetry and singing. Printed by Dar al farfur 2002 edition. Damascus.
His full name was Nur ad deen Abu Hassan Ali ibn sultan Muhammad al Qari al Harawiyy. Harawiyy was a city in Khorasaan or what is now commonly regarded as Afghanistan. He is also considered Meccan. This is because he travelled to the noble city of Mecca and resided there for more than 40 years not far from the holy Ka’ba. Whilst he was there, he studied with some of the foremost authorities on the Islamic sciences. To mention but a few of them: Ibn Hajr al Haytami, Abdullah Sindi and Ahmed ibn deen al Misri. He was an ascetic, modest in character, extremely cautious in matters of religion and known for his god fearing ness. From his taqwa or fear of god he would only eat that which he earned by the labour of his own hands. He would quote the hadith of the Prophet

“No one ever ate any food which was better than the labour of his hands, the Prophet Dawud

would eat from the labour of his own hands” This is a famous hadith narrated by Bukhari. He would often be heard saying: “May Allah have mercy on my father. He didn’t want me to become a scholar, out of fear that one day I might stand at the doors of the kings (and ask favour or be in theirs)”. He authored a small booklet and called it:” Distancing of the scholars from approaching the kings or emirates” He died in the holy city of Mecca in the year 1014 hijra and was buried there. It was said, When news of his death reached Egypt the scholars gathered to pray the Jannazah ghaybiyya or the funeral prayer for the absent person in the Al Azhar. The numbers exceeded four thousand people.