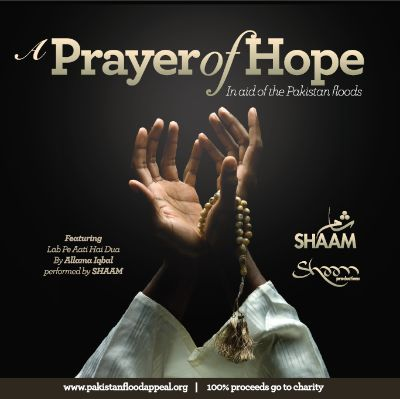 In July 2010 the North West of Pakistan experienced some of the heaviest rainfalls since 1929 that triggered floods, which resulted in over 1,600 deaths and over 20 million people being displaced from their homes and their livelihoods. Emergency support by governments and NGO’s across the world sought to provide food, clean water, medical aid and shelter whilst battling against deteriorating weather conditions. The work is ongoing; sadly, the suffering is far from over…

Having seen the heartbreaking images, we, like millions around the world were devastated and wanted to contribute as artists by releasing the “Prayer of Hope” single for the remarkable people of Pakistan and pray that you too will support the cause of those affected by donating generously.

‘Lab Pe Aati Hai Dua’ (The longing comes to my lips as Supplication) was chosen by us as it is the most widely recognised prayer by millions of people around the world, written by Pakistan’s most famous poet Allama Iqbal.

It is imperative that the disaster is not forgotten as rebuilding this region and the lives of those affected will take many years if not decades to re-establish.

“The Muslim is the brother of his fellow-Muslim; he should not mistreat him or let him down. Whoever meets the needs of his brother, Allah will meet his needs, and whoever relieves a Muslim of some distress, Allah will relieve him of some of the distress of the Day of Resurrection. Whoever conceals (the faults of) a Muslim, Allah will conceal him (his faults) in this world and the next.” [Bukhari: Kitaab al-Mazaalim, Baab laa Yazlim al-Muslim [al-Muslim, Fath al-Baari, 5/97.]