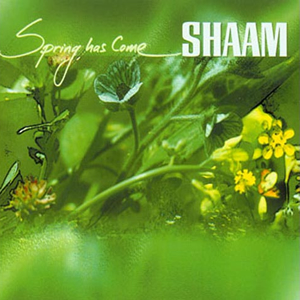 Recorded in the first three months of 2003, Spring has Come was developed with the coming of Rabi al-Awwal and the Milad-un-Nabi in mind. The nasheeds therefore have the Blessed Prophet as their theme; some directly such as the Urdu classics Makki Madani (O one from Makkah and Madinah) and Hazoor Agaey Hein (The Prophet has come), while others like the title track Spring has Come allude to him and his mission. All four English songs were written by the group and each is layered with fantastic harmonies and rhythmic drum patterns – the hallmark of SHAAM. Signs in particular, co-written by Yasin Alam and Executive Producer Tayyeb Shah, is both catchy and deceptively profound. Subhan Allah (Glory be to Allah) has an infectious beat, while the words outline the five pillars of Islam – children will find it particularly enjoyable and educational. SallAllahu a’la Muhammad (Blessings of Allah be upon Muhammad) takes a classic Arabic nasheed and transforms it into a great, rousing English song, translated and adapted by Mahmud Norris. The Arabic tracks Antum Muradi (You are my desire) and especially Salawaat (Peace and Blessings) meanwhile serve to remind the listener how effortlessly SHAAM can switch between languages and between traditional and contemporary styles of rendition.

The runaway success of Mercy like the Rain meant there was pressure to deliver and match that achievement with their follow-up album. So less than six months after having completed Mercy the guys were back in their Coventry studio. Haroon again took up the mantle of producer, ably assisted by sound engineer Darren Wood. Mahmud worked and re-worked the melodies and harmony arrangement to ensure they blended well with the drumming and vocals. Imran and Yasin joined in the development of the harmonies and production.

The end result is an album that is spiritually uplifting and contemporary. It certainly builds on the foundation and reputation of Mercy and, dare one say, surpasses it. Time will tell if it becomes as successful but the signs are very good.

2. SALLALLAHU A’LA MUHAMMAD – BLESSINGS OF ALLAH BE UPON MUHAMMAD [4:22]

SHAAM would like to thank Allah Most High, Lord of the Worlds, the Most
Merciful; peace and blessings upon His most exalted Messenger, master and
seal of the prophets of Allah, Muhammad and upon his family and companions – may Allah’s peace and blessings be upon them all.